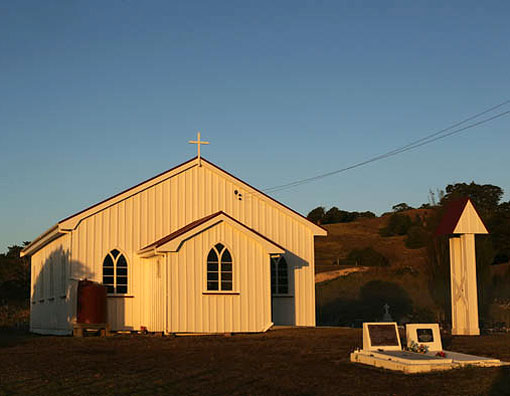 Kakaraea has a rich history that dates back to 1825 and the battle of Te Ika ā Ranganui. Also known as the Cathedral Church of Gittos, Kakaraea was first opened by the Wesleyan missionary Reverend William Gittos on 29 March 1874. The church played a important role in the history of the Kaipara and the spread of Christianity and Methodism in Northland.

Built to replace a raupō chapel on land donated by tupuna, the cathedral was designed in the gothic revival style using kauri timber. It cost three hundred and fifty pounds to build.

Initially Kakaraea faced the Otamatea River however it was turned ninety degrees  following a severe storm in 1936. It continued to be used but as more of our people moved to the city, the congregation  grew smaller.

By the 1950’s and 1960’s Kakaraea was in a poor condition.  Fund-raising efforts by whānau allowed for some of the restoration work to take place. However due to the size and scale of the building it was not possible to carry out all the work needed so Kakaraea was reduced to its present size.   Its design today remains as it was altered in 1965 with a lower roof and reduced length.

In 2006  concerned about a weakened structure and safety issues the Trustees resolved to restore Kakaraea once again. Funding for the project was provided by NZ Lottery Grants Board and Kaipara District Council Heritage Assistance Fund for funding of a Conservation Plan. Funding for the conservation work was provided by ASB Community Trust and NZ Lottery Grants Board.  Following two years of building work, Kakaraea was rededicated in November 2011.

Kakaraea is registered by New Zealand Historic Places Trust in recognition of its historical, cultural and social significance.